The Power of Voting for Those Who Can’t

Behind me is Josue, Corazón’s Field Director. I look over at him and he’s smiling from ear to ear, pointing at documents and excitedly talking to someone who seems to be listening intently and nervously nodding.

Her name is Nayelly, an Arizona native in her late 20’s and we begin to speak about what voting rights mean to her.

Q: What’s your name and tell us a bit about what just happened:
A: My name is Nayelly, I just registered to vote for the first time since becoming a Citizen in April. It’s all very exciting.

Q: Why do you think this was an important step to take?
A: Our vote is important. When SB1070 was happening, I wasn’t able to vote and we didn’t have that many Latinx votes in general. So now, I’m joining myself to the Latinx vote and I want to be a voice for those who can’t vote.

SB1070, also known as Support Our Law Enforcement and Safe Neighborhoods Act, is Arizona’s controversial anti-immigrant law that allowed police to demand “papers” and investigate immigration status if they suspect a person is undocumented. It was passed in 2010 and was the strictest anti-immigration law passed in the United States.

According to reports, churches in Arizona with large immigrant congregations experienced a 30 percent drop in their attendance figures. The government of Mexico reported that over 23,000 of its citizens returned to the country from Arizona between June and September 2010. This bill instilled fear to thousands of undocumented people in Arizona and left people who were already disenfanshized feeling that their voices, or existence, did not matter.

Q: What would you tell those who are in that position where they’re unable to vote? Is there something they can do?
A: I would tell them that even though they can’t vote, that there are people around them that can. So I would tell them to support and have conversations with people who are able to vote. They can canvass, join a march, or join an organization, getting involved in this way benefits everyone in the community, documented and undocumented.

According to the Migration Policy Institute there were 263,000 undocumented people in Arizona in 2020. Half of them have been in the United States for over 15 years.

Q: You mentioned SB1070, is there an issue right now that’s specific to Arizona or your community you’ve been keeping your eye on?
A: I’m planning to educate myself and get involved with Corazon to see what issues are affecting our community so I can make those decisions before heading to the polls.

In 2022, multiple bills were signed into law in Arizona including a ban on same-day voter registration — House Bill 2237 — as well as a Trump-endorsed Republican sweep of the primaries for major statewide offices.

Q: What would you say to someone who can vote but feels discouraged with the current political climate?
A: My father in law actually just became a citizen in April too. He’s currently not really aware of what’s going on politically and has always stayed distanced from engaging politically because, well, he couldn’t. I advised him to inform himself, to get connected with those around him, because his vote does make a difference.

Corazon has been serving the Arizona Latinx community, much of them undocumented or DACA. They plan to engage directly with people by opening their new office in the Guadalupe community where 75% of the population is Latinx and 18% Native American.

As I continue to speak with Nayelly, the smell of carne con salsa egg rolls and pinto beans begins to fill the air. To my right is a mural that takes up an entire wall of what seems to be an indigenous man and an expanding tree with deep roots being carried on his back in vibrant colors of brown, red, cool blue, and aqua green. The piece of art caught my attention, so I asked about the meaning of the mural and was told that it was based on Isaiah 44.

For I will pour water on the thirsty land,
and streams on the dry ground;
I will pour my Spirit upon your offspring,
and my blessing on your descendants.
They shall spring up among the grass
like willows by flowing streams.

Humans desire to have their voices heard, we desire to be seen and for our inherent dignity to be protected by our communities and leaders with power. When someone registers to vote, practices the act of voting, or encourages others to vote when they can’t, it is transformative. It can plant seeds in fertile soil and bless people for generations. Change starts with courage springing up from the grass and being nourished by the flowing streams that is our community, organizations doing the work, and faith. 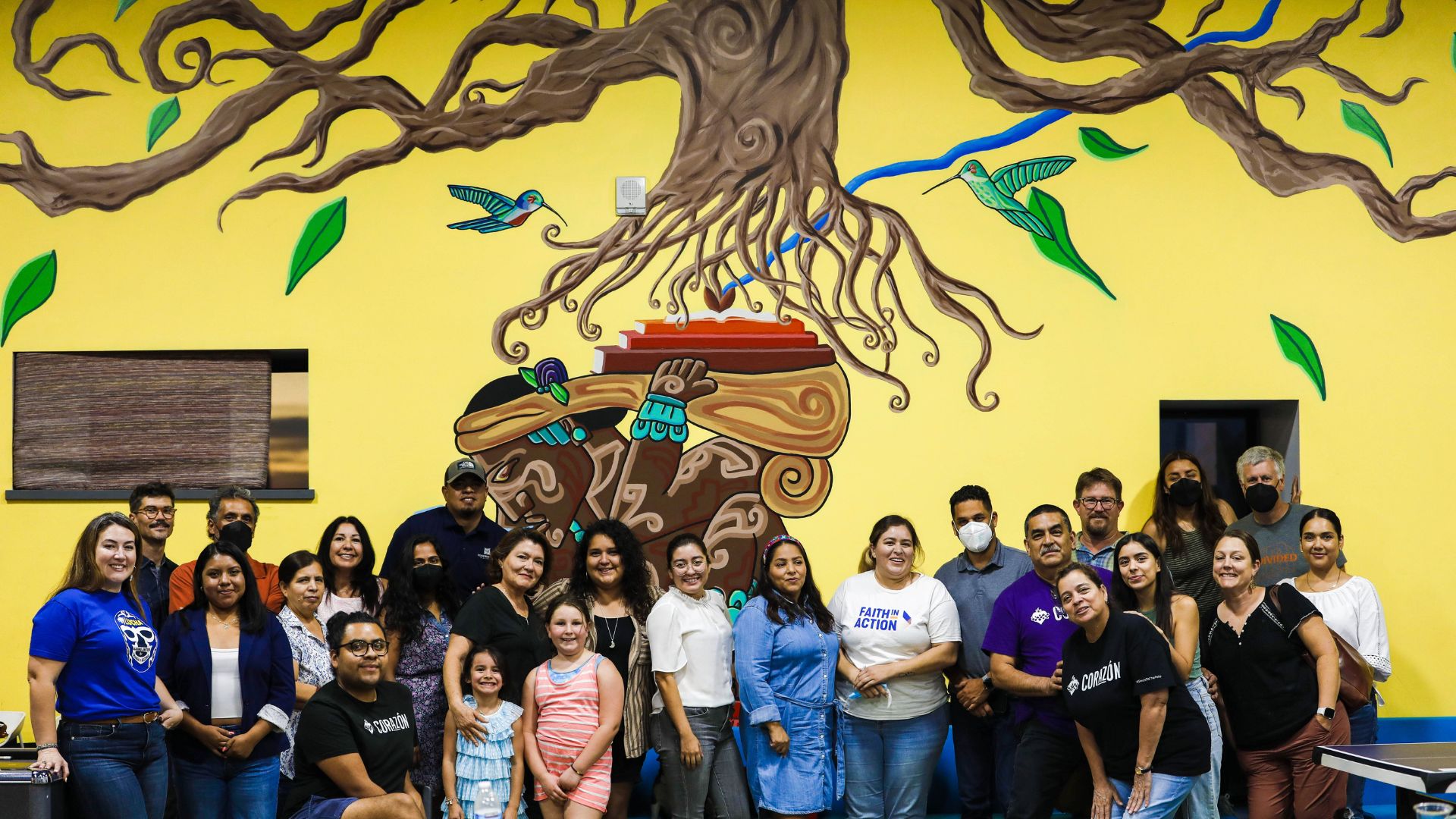 GIVE A MONTHLY OR ONE-TIME DONATION

Faith in Action is a 501c(3). Faith in Action and its affiliates are non-partisan and are not aligned explicitly or implicitly with any candidate or party. We do not endorse or support candidates for office.